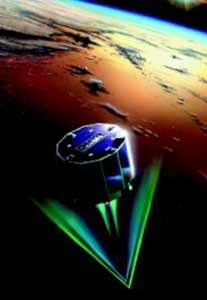 Launched on 14 February 1990, RME (Relay Mirror Experiment), also Losat-R (Low Altitude Satellite), was one element of an SDI effort to validate the technology needed to perform pointing, tracking, and laser beam relay functions for a ballistic missile defense system. The experiment directed a 1.064-micron laser beam emitted from one ground site to a mirror orbiting at 450 km altitude, and then to a ground-based target. The beam traveled over 1200 km.

The RME successfully demonstrated relay mirror stabilization, pointing/tracking, and simultaneous beacon tracking capabilities. In more than 60 beam-relay engagements, the whole system, once calibrated, would point the reflected laser beam 10 times more accurately than the Air Force had originally requested with less jitter than expected. Stable and continuous beam relays to the target board were accomplished for as long as 80 seconds.

The spacecraft and its payload performed the primary mission for a year, with successful contacts 15 times or more a month. After the primary mission, the Naval Research Laboratory used RME for several laser experiments and the Air Force continued to use the system for training flight operations personnel until it reentered the atmosphere in May 1992.