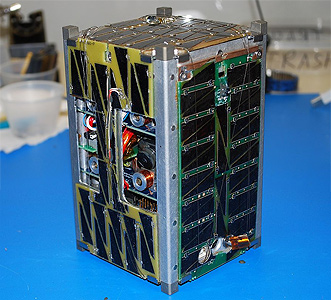 BRICSat-P (Ballistically Reinforced Communication Satellite) is a low cost 1.5U CubeSat built by the US Naval Academy Satellite Lab in collaboration with George Washington University, that will demonstrate on-orbit operation of a Micro-Cathode Arc Thruster (µCAT) electric propulsion system and carries an Amateur communication payload.

BRICSat-P is the redesigned and renamed PSat B (ParkinsonSat B).

A four µCAT thruster head system was placed on one side of the spacecraft around the center of gravity and will de-tumble the satellite from its initial expulsion, demonstrate rotational control about two axes, and perform a delta-v end-of-life scenario. Orbital analyses performed indicate that the four thruster-head system is able to fit in a 1.5U CubeSat with low power consumption such that other subsystems such as communication systems can perform normally. Dynamics analysis has been performed in MATLAB Simulink and STK that shows the thrusters can successfully perform the attitude control maneuvers. The project is fully funded and scheduled to launch in March 2015.

BRICSat-P suffered from power budget problems and has been unable to support all of its primary missions.