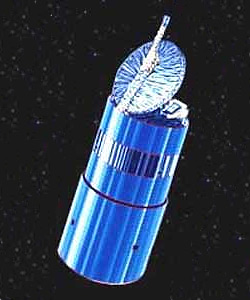 The satellite was to have been delivered on orbit. It was launched Aug. 18, 1996, but underperformance by its Chinese CZ-3 rocket left it in an incorrect, low orbit.

ChinaSat 7 was built to carry voice, fax, data, television signals, and other communications services across China and portions of Southeast Asia for ChinaSat, which is a division of China's Ministry of Post and Telecommunications. The spacecraft was manufactured at the Hughes Space and Communications Company facilities in El Segundo, Calif.

ChinaSat 7 carried 24 active transponders (with six spares) operating in the C-band (6/4 GHz) and extended C-band (3.6 GHz) frequency range, powered by 16 watt traveling-wave tube amplifiers. Four channels had 72 MHz of bandwidth each, and the remaining 20 had 36 MHz capacity each. Radiated power over China was to have averaged 37 dBW.

In common with all other spacecraft in the popular HS-376 line, ChinaSat 7 had two telescoping cylindrical solar panels and an antenna that folded down for launch. ChinaSat 7 measured 2.2 meters (7 feet, 1 inch) in diameter and a compact 3.1 meters (10 feet, 2.5 inches) tall when stowed for launch. With the solar panels deployed and the antenna unfolded in orbit, it was 7.5 meters (24 feet, 7 inches) tall.

The solar panels are covered with K-4 3/4 solar cells, which was to have produced 1200 watts at beginning of life. During eclipse, 32 cells in each of two super nickel-cadmium batteries were to have provided power. The transmit and receive beams were created by a 2-meter round antenna with two reflecting surfaces. One is sensitive to vertical polarization and the other to horizontal polarization. Separate microwave feed networks were used for the different polarizations. ChinaSat 7 was to have operated for 10 years had it reached geosynchronous orbit.

Hughes contracted with China Great Wall Industries Corporation for launch services on a CZ-3 from Xichang, China. ChinaSat 7 controllers were trained by Hughes, and base band ground station equipment was provided by Hughes Information Technology Systems.