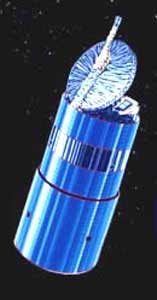 The new satellites have 10 year design lives, as opposed to 7 year lives for earlier satellite models. Life extension is due chiefly to the use of improved nickel-cadmium batteries and the introduction of solid state power amplifiers in place of traveling wave tubes for 18 of the 30 high power transmitters.

The HS-376 spacecraft is spin stabilized, a concept developed at Hughes and used in its communication and scientific satellites for more than 20 years. The HS-376 utilizes two solar cell covered concentric cylinders, of which the outer extends downward in space to greatly increase the solar generating power capacity over the models it replaces. Advanced solar cells made by Spectrolab, a Hughes subsidiary, are used. The solar cells develop 917 Watts at beginning of life. A folding dual reflector, which deploys in space, is located at the forward end of the spacecraft.

The spacecraft is launched with the main communications reflector and the outer cylinder stowed, a configuration that makes it possible to launch either with expendable rocket boosters or from the space shuttle. The compact stowed configuration allows the spacecraft to stand upright in the shuttle cargo bay; occupying a minimum of linear space is a cost effective use of the shuttle.

The satellites each have 24 transponder channels that can be switched by ground command to various combinations of regional coverage spanning the continental U.S. and Hawaii, Alaska, or Puerto Rico.

Coverage beams for the Telstar 3 satellites are formed by polarization selective surface reflectors offset by feed horn arrays. One array is for horizontal polarization and the other is for vertical.

The apogee motor that places the satellite into near geosynchronous orbit is a Thiokol Corporation Star-30B solid propellant rocket used on all HS-376 spacecraft.