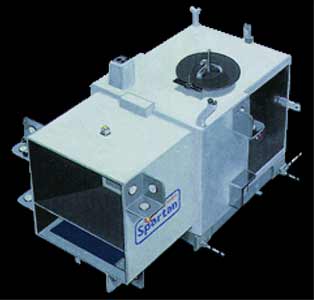 Spartan 1 (Shuttle Pointed Autonomous Research Tool for Astronomy 1) consisted of low-cost, Shuttle-launched, short-duration, sounding-rocket-type payloads. The payloads were retrievable and reusable with a turnaround time of approximately 6 to 9 months. It operated as an autonomous sub-satellite, and the data were stored on an internal tape recorder. Pointing and stabilization were achieved by an attitude control system capable of three-axis stabilized pointing to any target within plus or minus 3 arcmin.

Spartan-1, as the first of the series, was intended to demonstrate the low-cost approach and its ability to achieve the desired technical performance in the STS environment. The scientific objective of the spacecraft was to investigate the photon emission processes in clusters of galaxies and to explore the center of our galaxy in the photon energy range of 0.5 to 15 keV. The spacecraft allowed the instrument to scan various cosmic sources at rates of 10 to 20 arcsec per second.

This experiment consists of two large X-ray proportional counters equipped with collimators constructed from stacked, etched grids, plus aspect cameras, detector gas supply, and electronics. The photon energy range covers 0.5 to 15 keV. Because of alignment considerations, the collimators, aspect cameras, and the attitude control star tracker and gyro components are mounted on a common optical bench, which is attached to the spacecraft structure through kinematic mounts that eliminate flexing of the optical bench due to mechanical or thermal loads. The instrument has been flown numerous times on sounding rocket flights.

Spartan-B was to carry instruments that are used (1) to probe the physics of the acceleration of the solar wind by measuring temperatures, particle densities, and velocities between 1.5 and 6 solar radii; (2) to map X-rays emanating from clusters of galaxies and explore the center of our galaxy; and (3) conduct a far ultraviolet survey of selected star fields such as the Magellanic Clouds and the Andromeda Galaxy. Network support of Spartan-B will consist of C-band radar tracking from various ground stations.

Spartan-C was to carry a Schmidt electrographic camera which has been successfully flown in four previous sounding rocket investigations. Scientific objectives include a survey of selected star fields and far-UV images of diffuse nebulae and nearby galaxies. Spartan-C is designed to measure the brightness and map the positions of early-type stars, white dwarfs, and hot subdwarfs.