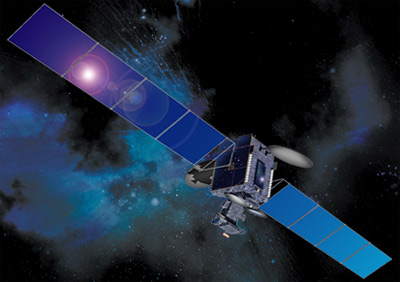 Built by Space Systems/Loral (SS/L), Orion 2 features 36 high-powered Ku-band transponders. It was launched into the orbital slot located at 15 degrees west longitude, where in-orbit testing will be conducted. Loral was in negotiations with Eutelsat, also a satellite services provider, to complete coordination of the Orion 2 satellite with the Eutelsat spacecraft in the region.

From its position in the orbital arc, Orion 2 significantly expanded Loral Skynet`s existing satellite capacity across the Atlantic, covering all of Europe - from the Atlantic Ocean to the Ural Mountains - as well as South America and the east coast of North America. In addition, the satellite delivers spot beam coverage of South Africa.

The 10,600 watt satellite is based on SS/L`s flight-proven, three-axis, body-stabilized SSL-1300 bus. SS/L's SSL-1300 buses are designed to achieve long useful orbital life -- in this case 15 years -- through use of a bipropellant propulsion system and a momentum-bias system for excellent station-keeping and orbital stability. Solar arrays and nickel-hydrogen batteries provide uninterrupted electrical power.

In 1998 Orion Network Systems was bought by Loral Skynet. Orion 2 was renamed Telstar 12 shortly after beeing launched into orbit.