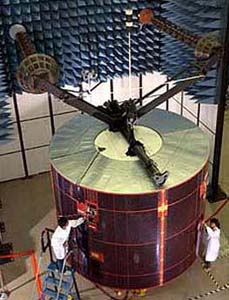 In September 1978, the United States Navy announced a contract award to Hughes Communication Services, Inc., a Hughes Aircraft Company subsidiary, to provide worldwide communications satellite service to the Department of Defense for at least five years at each of four orbital locations. The Navy would act as executive agent on behalf of the Department of Defense. The new satellite, known as Leasat or alternatively as Syncom-4, began service in 1984. Users include mobile air, surface, subsurface, and fixed earth stations of the Navy, Marine Corps, Air Force, and Army. Hughes Space and Communications Group, later known as Hughes Space and Communications Company, built the satellites.

Leasat is 4.26 meters in diameter and 6.17 meters high with its UHF and omnidirectional antennas deployed. With its antennas stowed in the launch configuration, Leasat is 4.29 meters high. Total payload weight (including launch cradle) in the shuttle is 7711 kg. Weight after separation from the shuttle is 6895 kg, and the satellite's weight on station at the beginning of life is 1388 kg.

Solar panel output is 1238 Watts after seven years in orbit. Three 25 A-hr nickel-cadmium batteries for eclipse operation are designed for a nominal maximum 45 percent discharge. Redundancy resulting from the three-battery system permits full load support with loss of one of the batteries.

Two large helical UHF antennas provide receive and transmit capability in the UHF band (240 to 400 MHz). Telemetry, command, and the Fleet Broadcast uplink and beacon are in the "exclusive" portions of the SHF band (7250 to 7500 MHz, and 7975 to 8025 MHz). Twelve UHF repeaters provide the main communications capability.

The principal Navy Fleet Broadcast function includes an SHF uplink, and both SHF and UHF downlinks. The additional antennas for this channel are the SHF uplink and downlink earth coverage horns, which support the uplink and acquisition/timing function, respectively. The UHF downlink for Fleet broadcast is multiplexed onto the UHF transmit helix.

Mounting the antennas on deployable structures allows them to be stowed for launch, resulting in considerable savings in the cost of launching the satellite from the space shuttle. (Shuttle launch costs are based on a formula which takes into account the ratio of either weight or length of satellite cargo, whichever is greater, to the shuttle's total capacity.)

The space shuttle places Leasat in a circular parking orbit at approximately 180 miles (296 km) altitude with 28.6 degrees inclination. Ejection of the spacecraft from the shuttle is initiated when locking pins at the contact points are retracted. An explosive device then releases a spring that ejects the spacecraft in a "Frisbee" motion. This gives the satellite its separation velocity and gyroscopic stability.

Two further sets of maneuvers are required to place the satellite in its circular orbit 22,300 miles (35,744 km) over the equator within a 5 degree inclination. The first set boosts the satellite into an elliptical transfer orbit where apogee and perigee are equatorial, with apogee at synchronous altitude. The second maneuvers circularize the orbit and remove all but 5 degrees of inclination, yielding the final synchronous orbit. Because of high satellite velocity in the parking orbit, a solid fuel perigee motor is used to accomplish rapid firing. Two liquid fuel motors are used to augment the velocity on successive perigee transits, to circularize the orbit, and to remove inclination.

The Leasat spacecraft were designed exclusively for launch on NASA's space shuttle. Leasat F1 was scheduled for launch in June 1984, but the shuttle mission was aborted only seconds before liftoff. Leasat F2 became the first in the series to be launched, on 30 August 1984. Leasat F1 followed on an 8 November 1984 launch. Leasat F3 was launched on the shuttle on 12 April 1985, but did not achieve orbit when the satellite failed to start. Four months later, NASA and Hughes mounted a salvage attempt during the 27 August 1985 shuttle mission on which Leasat F4 was launched. After attaching special electronics assemblies to Leasat 3 during two days of space walks, astronauts manually launched the satellite again. The electronics allowed ground controllers to turn on the satellite and, at the end of October, fire its perigee rocket and send Leasat 3 into orbit. Leasat 4 successfully obtained orbit and was undergoing tests about a week after launch when its UHF downlink failed. The satellite was declared a loss. The fifth and last Leasat, which was built as a spare, was successfully launched in January 1990.

Leasat 5 was retired in 2015 and was moved into a graveyard orbit above the geostationary belt.