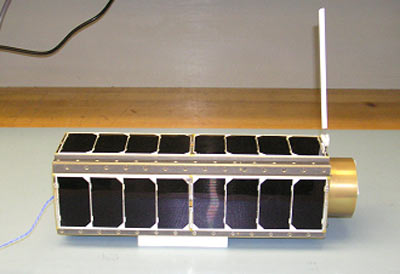 The GeneSat-1 CubeSat technology demonstration nanosatellite mission is a cooperative effort between NASA and various universities partnered at the Space Technology Center (STC) located at NASA/ARC (NASA/Ames Research Center) and managed by San Jose State University (SJSU), including SCU (Santa Clara University), Cal Poly, and SSDL (Space Systems Development Laboratory) and NCSBT (National Center for Space Biological Technologies) of Stanford University. The overall objective is to study the effects of the microgravity environment on biological cultures (bacteria, genetic and biological probes to detect "gene expression") - hence, the label of "GeneSat" mission due to the biological payload.

The GeneSat-1 payload must regulate the internal temperatures to ±0.5ºC. In addition, some knowledge about the space environment must be sensed and downlinked by spacecraft. The sensor complement includes the measurement of the space radiation and the microgravity environments.

The spacecraft conforms the a triple-cube architecture (of QuakeSat heritage), introducing the newly developed *.Sat bus of Stanford University, consisting of a bus module (1 CubeSat volume) and a payload module (2 CubeSat volumes) providing a robust, repeatable, low-cost technology validation platform for exploration research. The entire satellite is about 100 mm × 100 mm × 340 mm in size with a mass of about 3 kg.

The payload module features a pressurized sealed vessel, a cylinder containing the integrated fluidics, optical sensors, electrical/mechanical subsystems, internal heaters and controllers. The internal volume also provides humidified air to exchange with the microwells via a gas-permeable membrane. The LEDs (Light Emitting Diode) and detectors for the fluorescent optical assay are located outside the humidified headspace. The payload module represents a fully autonomous platform to perform genetic experiments on E.coli bacteria. The payload consists of a 12-well fluidics plate and uses 12 custom optical units for GFP and growth-rate measurement.

A launch of GeneSat-1 as a secondary payload on a Minotaur-1 launch vehicle of OSC is planned for November 2006. The primary payload on this flight is TacSat 2 of AFRL. The launch site is NASA's Wallops Flight Facility. The CubeSat will be deployed by a standard P-POD (Poly-Picosatellite Orbital Deployer) system of Cal Poly (the triple-cube configuration of GeneSat-1 utilizes the full three-cube capacity of a single P-POD).