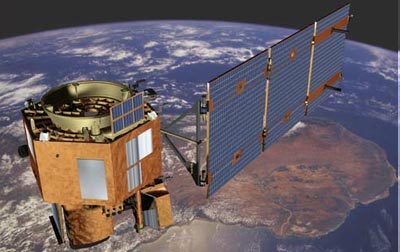 Three revolutionary land imaging instruments on EO-1 are collecting multispectral and hyperspectral scenes over the course of its mission in coordination with the Enhanced Thematic Mapper (ETM+) on Landsat 7. Breakthrough technologies in lightweight materials, high performance integrated detector arrays and precision spectrometers have been demonstrated in these instruments. Detailed comparisons of the EO-1 and ETM+ images have been carried out to validate these instruments for follow-on missions.

Each of the three instruments, being flown on the EO-1 spacecraft, incorporates revolutionary land imaging technologies which will enable future Landsat and Earth observing missions to more accurately classify and map land utilization globally.

Seven crosscutting technologies which will reduce the cost, mass and complexity of future Earth observing spacecraft have been demonstrated by EO-1 and will allow more scientific payload to fly on future missions.

The EO-1 spacecraft bus is being provided through a contract with Swales Aerospace, with Northrop Grumman as the key avionics subcontractor. Swales, as the prime contractor, is responsible for total integration of the EO-1 observatory.

The spacecraft also hosted the ST-6ASE (Autonomous Sciencecraft Experiment) experiment for the New Millennium Program, which was a software upload.