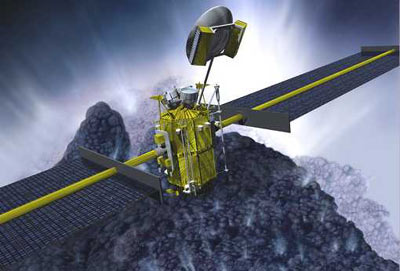 The Space Technology 4 (ST4) or Champollion mission is designed to test the new space technologies necessary for the next generation of outer solar system spacecraft. Champollion was a joint project of NASA with CNES, the French space agency.

It was designed to rendezvous and go into orbit about Comet Tempel 1, deploy a lander, and perform in-situ analysis of the comet nucleus. After launch in April 2003 on a Delta-7925 from Cape Canaveral Air Station the spacecraft was planned to rendezvous with Tempel 1 and go into orbit about the nucleus in 2006. After four months of orbit at 100 km distance the spacecraft was to soft-land on the comet's surface. A one meter long drill would have been used to collect samples of the nucleus, which was to be analyzed on-board with the results transmitted to Earth.

The launch mass of the spacecraft, including propellants, was 1051 kg. Champollion would have featured three NSTAR ion thrusters inherited from Deep Space 1. It would also be equipped with cameras, a gas chromatograph/mass spectrometer, an infrared/spectrometer microscope, and a gamma-ray spectrometer for in-situ measurements. Communications would be in X-band via a 1.3 m diameter antenna at 50 kbits/s. A solar array would have provided 10 kW at a distance of 1 AU.

Earlier plans to return a sample to Earth in 2010 were no longer part of the mission due to earlier budgetary considerations.

The Champollion ST4 mission was cancelled on 1 July 1999 due to budgetary constraints, when Champollion, which was intended to be a technology demonstration mission grew to a full fledged science mission.