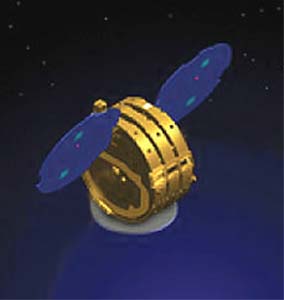 The TacSat-1 is a small technology mission of the Naval Force Research Laboratory (NRL) It is small imaging satellite whose collection activities will be directly controlled by commanders deployed in remote locations rather than a control center in the United States.

TacSat is a joint U.S. Navy and Air Force program, formally known as the Operationally Responsive Space Experiment. It combines existing military and commercial off-the-shelf technologies with a new commercial launch system providing more rapid and less expensive access to space. The experimental satellite, which is designed to last one year in orbit, will weigh only 240 pounds. Its design philosophy is to draw from traditional satellites and unmanned aerial vehicles (UAVs) in both function and hardware.

The satellite represents the first in a series of planned launches sponsored by the U.S. Defense Department's Office of Force Transformation. The goal of the TacSat-1 effort is to design, build and launch a functioning experimental satellite into low earth orbit in less than one year for a total cost not exceeding $15 million. This initiative, which began in 2003, will culminate in a launch attempt in spring 2003.

The Naval Research Laboratory is the program manager and is responsible for building the satellite. The Air Force Space Command's Space and Missile Center is providing missile oversight for the commercial booster rocket, and its 30th Space Wing is providing the launch facility and launch services. The National Reconnaissance Office (NRO) is providing the payload processing facility.

The spacecraft is equipped with two optical systems:

In August 2007, the TacSat 1 launch was cancelled as the already launched TacSat 2 has demonstrated a large part of the technologies, TacSat 1 was to demonstrate. In late 2008 it was reported, that it would be launched on the sixth Falcon-1 launch vehicle. The resurrected mission was renamed TacSat 1A, but later it was again cancelled.