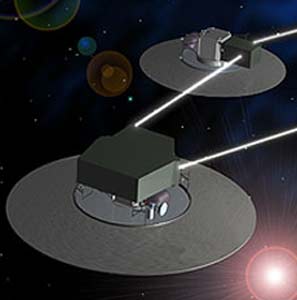 Starlight (formerly ST-3 and DS-3) was to develop and flight validate technologies for precision formation flying and separated spacecraft interferometry that will enable future astrophysics missions.

The separated spacecraft mission is designed to provide a technology demonstration for deep space precision formations and very long baseline optical interferometry. The interferometer would be distributed over two small spacecraft: one spacecraft would serve as a collector, directing starlight toward a second one, called the Combiner, which would collect starlight separately and combine the light to perform the integerometric detection. The interferometer baselines would be variable, allowing spacecraft separations of 40 m to 1 km in a parabolic formation, and providing angular resolutions from 5 to 0.5 nanoradian (1 to 0.1 milliarcsec).

It was originally planned for a launch in 2003 on a Delta-7325-10C rocket. It was reduced to a ground demonstration of interferometry technology.