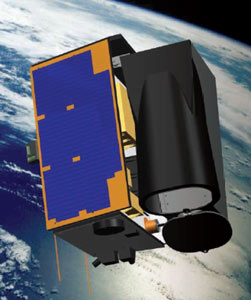 SSTL is developing the TopSat (Tactical Optical Satellite) enhanced microsatellite bus as a subcontractor to QinetiQ, for the UK Government. TopSat is jointly funded by the British National Space Centre (BNSC) Microsatellite Applications in Collaboration (MOSAIC) programme and the Ministry of Defence. TopSat's primary mission is to demonstrate that a microsatellite can provide responsive high-resolution imaging, with 2.5 meter-resolution images delivered directly from the satellite to ground terminals within the same footprint.

SSTL developed a customised enhanced microsatellite bus for TopSat based on the Microsat-100 bus, with specific enhancements to provide the necessary payload power and highly agile attitude control. The zero-momentum-bias attitude control system is capable of time delay integration and rapid pitch and roll off-pointing up to 30 degrees from nadir. For end users, this will mean that several independent images can be targeted in rapid succession, and that high resolution imaging will remain possible even in poor winter lighting conditions. This highly capable platform weighs only 90 kg.

TopSat was launched in October 2005 onboard a Kosmos-3M launch vehicle from the Plesetsk Cosmodrome. The US TacSat program used TopSat for rapid imaging tests, which provided imagery in less the 90 minutes to combat units using the internet. For these tests, TopSat was refered to as TacSat 0.