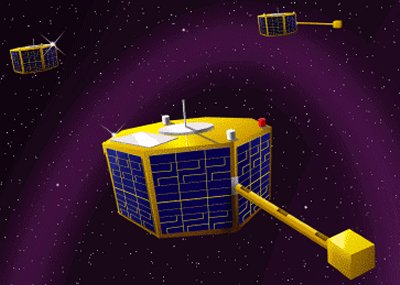 ST5's (a.k.a. NCT - Nanosat Constellation Trailblazer) objective was a mission to demonstrate and space-test the ability of "smart" satellites to identify scientific events and implement cooperative data-taking strategies.

ST5 project also developed and build the spacecraft bus that enables the mission's multiple nanosats to be launched into space from a single rocket and spun into orbit approximately 4,500 kilometers above Earth. The spinning motion is required for optimal use of sunlight. Sunlight is collected by the solar array panels and transformed into energy for the satellite to use as power for all the internal components and instruments.

Once deployed, the smallsats flew in various location points within the magnetosphere, the region that surrounds our planet like a "suit of armor." Magnetometers onboard each of these miniaturized satellites measured energetic particles in the magnetosphere, The data was then forwarded to scientists on the ground for analysis. Returned data aided in determining ambient radiation levels and the spacecraft's subsystem response to this hazard.

Each smallsat be commanded individually from ground stations on the Earth, except for a one-week period of "lights out." During this time, the smallsats will fly "autonomously" with pre-programmed commands in a test to determine if ground commanding (for 24 hours) is really necessary.

ST5's "maiden voyage" will pave the way for flying tens to hundreds of such miniature craft in future missions. These missions can only be flown if they are capable of responding to the changes in the charged particles and magnetic fields in the harsh environment of Earth's magnetosphere.

Originally planned for a piggy back launch into geostationary transfer orbit, the ST5 spacecraft were finally launched on a dedicated Pegasus-XL launcher, using a special dispenser.