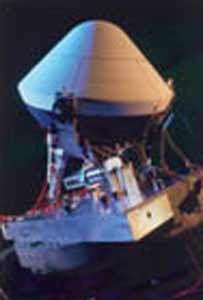 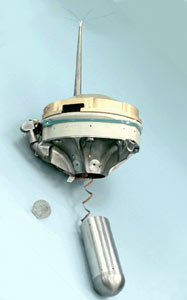 The Deep Space 2 (DS2) project is a New Millenium mission consisting of two probes which were to penetrate the surface of Mars near the south polar layered terrain and send back data on the sub-surface properties. On 3 December 1999 the probes were nearing Mars on a trajectory to enter the atmosphere and bring them to their intended landing site, but contact was never made with either probe and the mission was presumed lost. Also named the Mars Microprobe Project, the probe mission had as scientific objectives to:

Data was also to be obtained on the atmospheric density profile and near-surface soil stratification using deceleration measurements during atmospheric entry and landing. The mission was also planned to serve as a technology test for many of the components of the probes and a demonstration of passive atmospheric entry and survivable hard impact. The individual probes were named Amundsen and Scott in honor of the famous polar explorers.

The probes had a total mass of 3.572 kg each and consisted of three parts. The aeroshell, 275 mm high and 350 mm in diameter, encased the probe and was designed to protect it from the heat of atmospheric entry. The aeroshell was made of a ceramic material designed to shatter on impact with the surface and had a mass of 1.165 kg. The probe itself consisted of two parts, an aftbody and a forebody. The aftbody was a short cylinder, 105.3 mm high and 136 mm in diameter, which contained the primary batteries, pressure sensors, atmospheric accelerometer, and communications equipment, including a 127 mm high antenna. The aftbody was designed to remain above the surface after impact to provide radio communications. The forebody, or penetrator, was a long thin cylinder (105.6 mm long, 35 mm in diameter) with a mass of 0.670 kg. One set of thermal properties equipment, including a temperature sensor, were housed near the front of the cylinder. Above this at the center of the cylinder was the drill motor surrounded by the electronics and microcontroller. Over these was another set of thermal properties equipment. Above this were the drill apparatus, soil sample chamber, and the heating and ice and water vapor detection equipment. At the top of the penetrator was a 3-axis impact accelerometer. The forebody fit in the aftbody in its stowed position and was designed to separate on impact with the surface. It had a rounded front end in order to penetrate into the ground. The aftbody and forebody were connected after impact by a flexible cable. Both parts of the probe were designed to withstand extreme decelerations.

Before deployment the probes were mounted on the cruise stage of the Mars Polar Lander under the solar panels. They were self-contained and had no electrical connection to the Lander. The probes were each powered by two non-rechargeable lithium-thionyl chloride batteries of 600 milliamp hours. The batteries were expected to provide 6 - 14 volts nominally from one to three days, but may have lasted longer. The probes were designed to transmit data at 7000 bits per second on a UHF band.

The Deep Space 2 probes, attached to the Mars Polar Lander, were launched on a Delta-7425 which placed them into a low-Earth parking orbit. The third stage fired for 88 seconds at 20:57 UT 3 January 1999 to put the spacecraft into a Mars transfer trajectory and the spacecraft and third stage separated at 21:03 UT. A trajectory correction maneuver took place at 12:30 UT on 21 January 1999. After an 11 month hyperbolic transfer cruise, the Mars Polar Lander was to separate from its cruise stage just before atmospheric entry on 3 December 1999 and about 2 minutes after the last telemetry was sent to Earth. The two probes were to be separated from the cruise stage by mechanical pyros approximately 18 seconds later. At this time the probes were to power up and perform onboard system health checks. The probes had no active control or propulsion systems, but were designed to passively orient themselves during free fall with the forebody front forward. Impact was expected to occur at 160 to 200 m/s with an angle of attack of less than 12 degrees. On impact, the aeroshell would shatter and the forebody separate from the aftbody and penetrate to 0.3 to 1 meter below the surface depending on the constitution of the underlying material. The 3-axis accelerometer was designed to measure the deceleration of the forebody, which would help determine the depth of probe penetration and provide data on the hardness and layering of the material. The impacts were planned to occur about 15 to 20 seconds before the Mars Polar Lander touchdown, at 20:15 UT Earth received time (3:15 p.m. EST) on December 3. Light travel time from Mars at that point was approximately 14 minutes. However, no signals were received from the probes by Mars Global Surveyor after landing or over the following days. The reason for the failure of the probes is not known.

Immediately following impact, flight and landed system data would have been collected to validate the technologies over the first 30 minutes. The prime mission was planned to be over once the probes transmitted one set of engineering data via Mars Global Surveyor (MGS), which would have taken place at about 03:30 UT on 4 December (10:30 p.m. EST 3 December). Then commands would be sent from Earth via MGS to begin the soil experiments which involved a small drill which would be deployed out the side of the forebody. The drill would bring approximately 0.1 grams of sample into the water experiment sample cup inside the forebody, where it was to be examined for the presence of ice. The sample would then be heated in 10 degree C increments and measurements of the amount of water vapor released at each stage would be made using a tunable diode laser, giving information on the water-bearing minerals within the sample. The temperature sensor in the forebody was designed to measure thermal properties of the martian soil and allow estimates to be made of the conductivity. A sun detector on the aftbody was to be used to verify that the aftbody remained on the surface after landing. Atmospheric pressure and subsurface temperature measurements would have been made every hour for the two day nominal mission in conjunction with measurements made by the Mars Polar Lander, and continue as long as the batteries held out. Data would be stored on board and then transmitted to the Mars Global Surveyor spacecraft and relayed to Earth.

The target area is located within the northern boundary of the martian polar layered terrain, near 73 degrees south latitude, 210 degrees west longitude. The landing area for both probes should be about 50 to 100 km from the Mars Surveyor '98 Lander touchdown site. This area is considered to be an important reservoir of water, carbon dioxide and other volatiles on Mars. The total cost of development of the Deep Space 2 probes was $29.2 million.