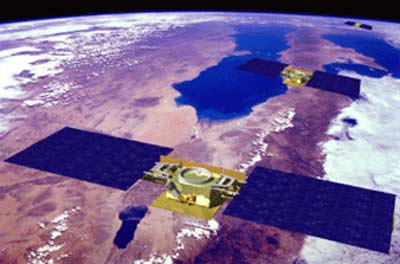 The U.S. Air Force Research Laboratory (AFRL) is planning a flight experiment, dubbed TechSat 21 and scheduled for launch in 2006, to demonstrate a formation of three lightweight, high-performance microsatellites. The formation will operate together as a "virtual satellite" with a single, large radar-antenna aperture.

The U.S. Air Force has terminated its TechSat 21 experiment, which was intended to demonstrate the ability of multiple small satellites flying in formation to perform missions traditionally carried out by single, larger satellites.
The technical issues on the project were "far more challenging than originally thought," forcing the Air Force to "restructure the program," according to Maj. Gen. Paul Nielsen, director of the Air Force Research Laboratory.

The ST-6ASC component of NASA's New Millennium Program was to fly on Techsat-21, but was cancelled with Techsat-21. One of the Techsat-21 busses is being converted to the JWS D1 (TacSat 2) satellite.