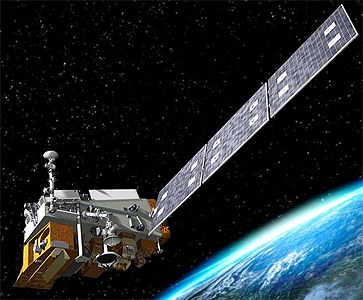 NASA and the NPOESS Integrated Program Office (IPO) are developing NPP (NPOESS Preparatory Project) as the mission precursor to the NPOESS mission and to provide data continuity between the EOS Terra and Aqua missions and the NPOESS launch slated for late in the decade. NPP also provides the NPOESS IPO with risk reduction for the NPOESS program through early flight validation of critical NPOESS sensors.

These instruments will study global change, including atmospheric temperature and humidity sounding, sea-surface temperature, land and ocean biological productivity, cloud and aerosol properties and global ozone levels. The Ozone Mapping and Profiler Suite Limb Subsystem (OMPS-Limb) was added after it has been removed from NPOESS in 2006.

After the cancellation of NPOESS in 2010, NPP is the only element retained. It will be used as an operational meteorological satellite in the JPSS (Joint Polar Satellite System).

NPP was successfully launched on a Delta-7920-10C booster from Vandenberg Air Force Base. After initial check out in orbit, NASA renamed the spacecraft on 24th January 2012 to Suomi National Polar-orbiting Partnership, or Suomi NPP in honor of the late Verner E. Suomi, a meteorologist at the University of Wisconsin who is recognized widely as "the father of satellite meteorology."

A second, nearly identical satellite called JPSS 1 has been ordered in September 2010 for launch in 2016. It will also be launched on a Delta-7920-10C rocket. The differences to NPP are: increased mission assurance requirements, increased lifetime to seven years, and addition of a Ka-band downlink.