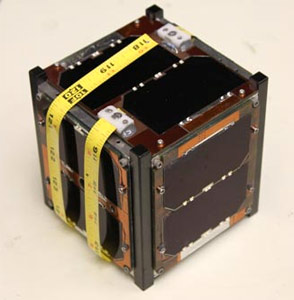 M-Cubed/COVE is a 1U CubeSat developed by the University of Michigan's Student Space Systems Fabrication Lab (S3FL). Development began in 2007.

The objective of MCubed is to obtain a mid resolution image to date of Earth with at least 60% land mass and a maximum of 20% cloud coverage from a single cubesat platform. S3FL is also developing the MCubed bus with the intention of making it a heritage design, thus allowing for future missions to be flown on the same bus.

Also on board is JPL's COVE (CubeSat On-board processing Validation Experiment) to demonstrate an on-board processing system to optimize the data processing and instrument design of a multi-angle SpectroPolarimetric Imager (MSPI) for the ACE Decadal Survey mission which will achieve a two-orders of magnitude reduction in data rate.

M-Cubed was launched in the Fall of 2011 on the NASA's third Educational Launch of Nanosat (ELaNa-3). After deployment, M-Cubed/COVE stayed magnetically attached to another cubesat, E1P U2 (HRBE). The exact cause of the conjunction is unknown, and it is hypothesized that it was caused by the magnets in both satellites. Both CubeSats include a permanent magnet for passive attitude control. While alive and transmitting, the project team hasn't been able to command the spacecraft. The hypothesis is, that this is due to a de-tuned antenna given the close proximity of HRBE.

M-Cubed/COVE-2 is a reflight system of the M-Cubed/COVE satellite that experienced ananomaly leading to the post-deployment magnetic conjunction of two CubeSats. The mission of M-Cubed/COVE-2 remains the same, to take mid-resolution images of the Earth at approximately 200 m per pixel while carrying COVE. It was launched on the ELaNa-2 mission.