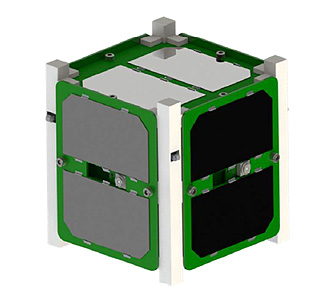 MakerSat-0 was placed in a SSO where it will monitor characteristics of different plastics in the vacuum of space while also capturing images of the earth. This is in preparation for MakerSat-1 – a CubeSat to be manufactured and assembled on the International Space Station.

MakerSat 0 was selected in 2016 by NASA's CubeSat Launch Initiative (CSLI) to be launched as part of the ELaNa program. It was baselined to fly in 2018 on the ELaNa 20 mission on a LauncherOne rocket, but has moved up to a 2017 launch on the ELaNa-14 mission on a Delta-7920-10C.

MakerSat-1 is a technology proof-of-concept mission to demonstrate microgravity additive manufacturing, assembly, and deployment of a CubeSat from the International Space Station. MakerSat-1 is the first spacecraft explicitly designed to be 3D-printed aboard the ISS, easily and safely snap-assembled by the astronaut crew in only 5 minutes without tools or fasteners, and then gently deployed directly into orbit from the ISS. Its structural frame was 3D-printed in August 2017, using the Additive Manufacturing Facility (AMF) printer aboard the ISS. Six circuit boards/batteries are being sent to ISS on a July 2019 re-supply flight of the Dragon CRS-18 capsule to permit the crew to finish snap-together assembly, and battery charging. The MakerSat-1 equipment will be launched on a SpaceX Falcon-9 v1.2 (Block 5) vehicle where it will be transported onto the ISS. It was then deployed from the SEOPS deployment system onboard the Cygnus CRS-12 spacecraft hatchdoor after departure from the ISS.

Note: * Launch date is for the main equipment parts