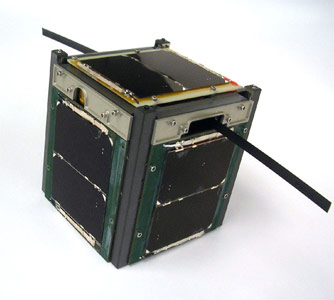 Its mission is to detect the Van Allen radiation belts in honor of the 50th anniversary of Explorer-1, America's first satellite that first discovered the cloud of highly energetic electrons trapped in the Earth's magnetic field.

E1P will carry a miniature Geiger tube donated by Dr. Van Allen using it to measure the intensity and variability of these electrons in low earth orbit.

E1P will demonstrate software technology developed at SSEL that uses a popular chip radio to close a digital data link with standard ham radio hardware allowing people around the world to contact the satellite and download science and housekeeping data.

A second flight model, E1P U2, was launched through the NASA Educational Launch of Nanosatellites (ELaNa) program in October 2011 on the ELaNa-3 mission. After reaching successfully orbit, it was renamed HRBE (William A. Hiscock Radiation Belt Explorer). After deployment, E1P U2 stayed magnetically attached to another cubesat, M-Cubed/COVE. The exact cause of the conjunction is unknown, and it is hypothesized that it was caused by the magnets in both satellites. Both CubeSats include a permanent magnet for passive attitude control. HRBE did not suffer due to this connection.