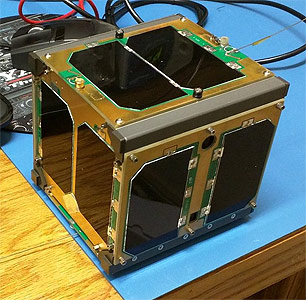 RadFxSat is an 1U CubeSat designed to operate in Low Earth Orbit built based on the design of Fox 1A. It carries a 2 meter whip antenna and a 70 cm whip antenna.

The Vanderbilt payload is to advance the state of the art in understanding the effects of space radiation on electronic components, demonstrate an on-orbit platform for radiation qualification of components for space flight and to validate and improve computer models used to predict radiation tolerance of semiconductor manufacturing processes.

AMSAT's payload is the same as on Fox 1A, a FM analog transponder for digital data up to 9600 bps, but operating on but on a different frequency pair.

RadFxSat was accepted into NASA ELaNa program in 2013. It was launched on the ELaNa-14 mission.