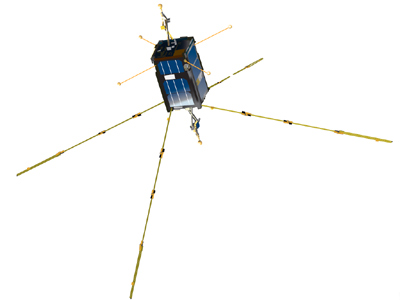 DICE (Dynamic Ionosphere CubeSat Experiment) will map geomagnetic Storm Enhanced Density (SED) plasma bulge and plume formations in Earths ionosphere. Two identical spinning spacecraft will measure plasma density and electric fields to determine the how and why of variations in ionospheric plasma density that affect the performance of communications, surveillance, and navigation systems on earth and in space.

The DICE mission consists of two identical 1.5U CubeSats deployed simultaneously from a single P-POD (NASAs Poly Picosatellite Orbital Deployer) into the same orbit. Each will each carry two Langmuir probes to measure in-situ ionospheric plasma densities and electric field probes to measure DC and AC electric fields. These measurements will permit accurate identification of storm-time features, such as the SED bulge and plume, together with simultaneous, co-located electric field measurements, which have previously been lacking. Over time, the satellites will separate relative to each other due to differences in the ejection velocity. The use of two identical satellites permits the de-convolution of spatial and temporal ambiguities in the observations of the ionosphere from a moving platform.

The satellites were launched on the ELaNa-3 mission.