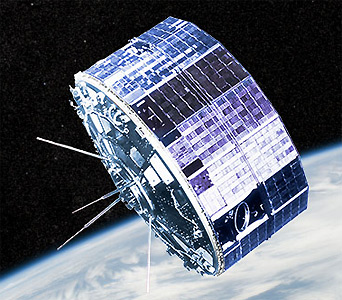 The ESSA series was the second generation of US meterological satellites after the TIROS (Television & Infra-Red Observation Satellite) series. They were also called OT (Operational TIROS), TOS (TIROS Operational Satellite).

This desiign was a spin-stabilized operational meteorological spacecraft designed to take and record daytime cloudcover pictures on a global basis for subsequent playback to a ground acquisition station. The satellite had essentially the same configuration as that of the TIROS series, i.e., an 18-sided right prism, 107 cm across opposite corners and 56 cm high, with a reinforced baseplate carrying most of the subsystems and a cover assembly (hat). Electrical power was provided by approximately 10,000 1- by 2-cm solar cells that were mounted on the cover assembly and by 21 nickel-cadmium batteries.

Two redundant wide-angle cameras were mounted on opposite sides of the spacecraft and canted 75 deg from the spacecraft spin axis. A pair of crossed-dipole command and receiving antennas projected out and down from the baseplate. A monopole telemetry and tracking antenna extended up from the top of the cover assembly.

There were differences in the imaging system acorss the series:

The satellites were placed in a cartwheel orbital mode, with its spin axis maintained normal to the orbital plane. The satellite spin rate and attitude were determined primarily by a Magnetic Attitude Spin Coil (MASC). The MASC was a current-carrying coil mounted in the cover assembly. The magnetic field induced by the current interacted with the earth's magnetic field to provide the necessary torque to maintain a desired spin rate of 9.225 rpm. Five small solid-fuel thrusters mounted around the baseplate provided a secondard means of controlling the spacecraft spin rate.