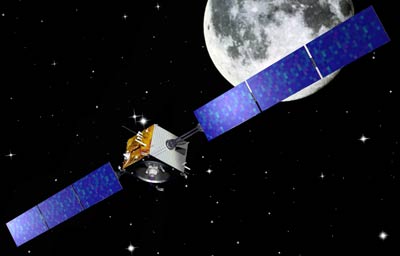 The SMART 1 (Small Missions for Advanced Research in Technology 1) is a lunar orbiter designed to test spacecraft technologies for future missions. The primary technology being tested is a solar-powered ion drive. It will also carry an experimental deep-space telecommunications system and an instrument payload to monitor the ion drive and study the Moon. The primary scientific objectives of the mission are to return data on the geology, morphology, topography, mineralogy, geochemistry, and exospheric environment of the Moon in order to answer questions about planetary formation accretional processes, origin of the Earth-Moon system, the lunar near/far side dichotomy, long-term volcanic and tectonic activity, thermal and dynamical processes involved in lunar evolution, and external processes on the surface.

SMART-1 is a box-shaped spacecraft with two large solar panel wings extending from opposite sides. The launch mass, including fuel, is 350 kg, the mass at the time it reaches the Moon should be about 305 kg. A solar-electric propulsion system uses xenon as a propellant by ionizing the xenon and accelerating and discharging the plasma from the spacecraft at high speed. Electrons are also released into the flow to maintain a neutral charge on the spacecraft. A thrust of 70 mN and a specific impulse of 1600 s is produced.

The spacecraft will carry a suite of science and technology instruments with a total mass of 14.65 kg. The science instruments include a pan-chromatic camera (AMIE) for lunar imaging, Langmuir probes mounted on booms (SPEDE) to measure the plasma environment, and radio science experiments (RSIS). Science instruments which are being tested as part of the technology verification are a miniaturized visible/near-infrared spectrometer (SIR) for lunar crustal studies and a miniature X-ray spectrometer for astronomy and lunar chemistry. The EPDP multi-sensor package was designed specifically to monitor the ion propulsion system, it also works in concert with the SPEDE to study the space plasma environment. The RSIS is also used to monitor the ion propulsion system. Finally an experimental telecommunication and tracking system (KATE) is included in the payload for technology assessment.

The SMART-1 spacecraft was launched in mid-2003 as an auxiliary passenger on an Ariane-5 Cyclade which will be launching another large satellite as its primary payload. The spacecraft will use its ion drive over a period of 15 to 17 months to reach the Moon and enter a 1000 × 10,000 km polar orbit. It will nominally spend 6 months in lunar orbit mapping the Moon's surface and evaluating the new technologies onboard. [NASA]