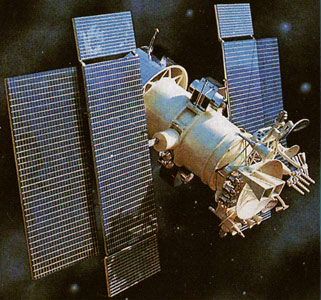 The geostationary Gorizont satellites are part of the Russian YeSSS Unified Satellite Communication System. These satellites provided civilian and military telephone, telegraph, and facsimile communications services, in addition to relaying TV and radio broadcasts. Gorizont also supported maritime and international communications from 1988 as an element of the Okean system operating at 1.5 to 1.6 GHz. The Gorizont system occupies 10 position on the geostationary orbit.

The KAUR-3 spacecraft bus was 3-axis stabilized using liquid propellant micro-engines to within 0.25 degrees of the earth's centre. The single-unit body was equipped with solar panels, and active liquid-gas phase-change thermoregulation system, and a corrective engine unit for making orbital maneuvers. 25 square meters of solar panels provided 1280 W of power. Gorizont was equipped with 6 C-band transponders and 1 Ku-band transponder.

Three Gorizonts were deployed to an orbital location owned by Tonga and were operated for the US company Rimsat (Gorizont 17 as Tongastar 1, and Gorizont 29 and 30 as Rimsat 1 and 2). Later the two Rimsats were transferred to PASI and AsiaSat (one each) and finally both to LMI.