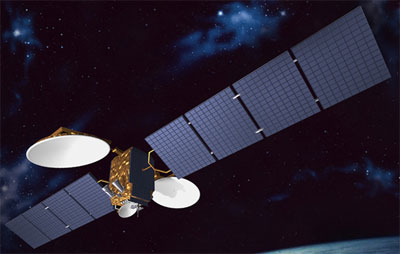 LMI-1 (Lockheed Martin Intersputnik) was built by Lockheed Martin Commercial Space Systems and operates at an orbital location of 75 degrees East. Equipped with 44 high-power C- and Ku-band transponders, the satellite provides high-quality and reliable fixed service telephony and direct broadcast television service. The satellite helps to satisfy the rapidly growing demand of Russian telecommunication and broadcasting companies for satellite capacity. The spacecraft is the first of several planned state-of-the-art satellites that are to provide connectivity to business and residential customers. In addition to its Russian coverage, LMI-1 is to deliver telecommunications services in the Commonwealth of Independent States, Eastern and Central Europe, Asia and Africa.