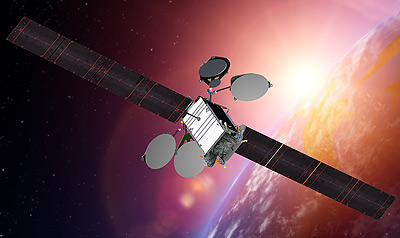 Asia Broadcast Satellite (ABS) announced in May 2015, that it is about to contract the construction of ABS 8 comsat to Boeing Satellite Systems. The ABS 8 satellite will be placed in the orbital position 116.1° East, to provide C-, Ku- and Ka-band transponders.

The satellite will be constructed on the BSS-702SP bus - a version that features an all-electric propulsion system. ABS-8 is a tri-band satellite with C-, Ku- and Ka-band capacity, part of it devoted to a high-throughput mission with multiple spot beams that, depending on market conditions then, could be transformed into a more-classic widebeam satellite given the flexibility of the payload.

SpaceX had been selected as the launch provider for a launch in late 2017 or early 2018 on a Falcon-9 v1.2 rocket. The launch may be shared with another BSS-702SP type electric propulsion satellite, if one is available.

The contract was terminated in July 2015, due to the U.S. Export-Import Banks loss of its operating charter due to congressional opposition. Both contract partner tried to renegotiate the satellite contract, but apparently without success.