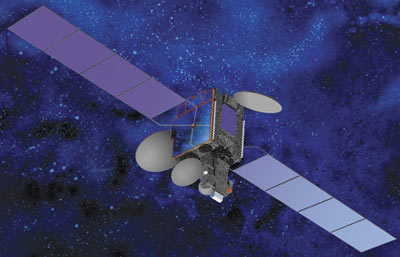 Agila 2, delivered on orbit in 1997, is the most powerful telecommunications satellite in service in the Asia-Pacific region. The new satellite is a prime example of SS/L's dominance in the emerging domestic and international broadcast satellite market.

Designed, built, and launched by SS/L for Mabuhay Philippines Satellite Corporation, Agila 2 delivers broadcast television, telephone, and data services to an area that covers Southeast Asia, from the Philippines to Hawaii, to India, Pakistan, and Bangladesh, and to Vietnam and China.

A single Agila 2 satellite transmits more than 190 channels of high-fidelity digital programming to cable companies and home satellite dishes, along with the capability to handle more than 50,000 simultaneous two-way telephone conversations.

Agila 2 features the largest number of active transponders of any satellite in the region. It contains 30 C-band transponders at 27 Watts and 24 Ku-band transponders at 110 watts, combinable to 12 high-power 220 watt transponders. Total dc power at End of Life (EOL) is more than 8200 Watts. The combination provides a power-to-mass ratio of 5-to-1, making Mabuhay one of the most efficient satellites in the industry.

As part of the contract, SS/L procured the launch vehicle, built a satellite control ground station in Subic Bay in the Philippines, and trained Agila 2 personnel who operate the satellite. The spacecraft was launched on a CZ-3B.

After negotiations with ProtoStar to take the satellite over as ProtoStar-3 came to no conclusion, the satellite was acquired by Asia Broadcast Satellite and renamed Agila 2 / ABS 5 in late 2009. In late 2011 it was repositioned to 3° West and renamed ABS 3