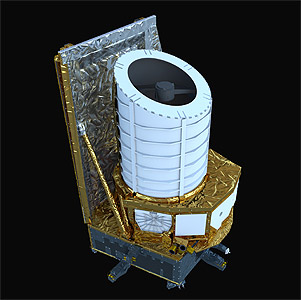 Euclid is an ESA mission to map the geometry of the dark Universe. The mission will investigate the distance-redshift relationship and the evolution of cosmic structures. It achieves this by measuring shapes and redshifts of galaxies and clusters of galaxies out to redshifts ~2, or equivalently to a look-back time of 10 billion years. It will therefore cover the entire period over which dark energy played a significant role in accelerating the expansion.

The Euclid spacecraft will have a launch mass of around 2100 kg. It will be about 4.5 meters tall and 3.1 meters in 'diameter' (with appendages stowed). The nominal mission lifetime is six years.

The Euclid spacecraft will be made up of two major assemblies:

Euclid will be carried into a direct transfer orbit by a Soyuz-ST-B Fregat-MT or an Ariane-62 launch vehicle departing from Europe's Spaceport in French Guiana. The transfer phase to the target orbit around the second Sun-Earth Lagrange point, L2, will last approximately 30 days. A correction manoeuvre will be performed about two days into the flight, once sufficient tracking data have been acquired to evaluate the radial velocity error, which arises due to uncertainties in the conditions during launch. Commissioning of the spacecraft and instruments will start during the transfer phase. No insertion manoeuvre is needed to reach the chosen orbit.

A large-amplitude (~ 1 × 106 km) halo orbit around the second Lagrange point of the Sun-Earth system (L2) has been selected because it offers optimum operating conditions for Euclid: a benign radiation environment, which is necessary for the sensitive detectors and very stable observing conditions, which are sufficiently far away from the disturbing Earth-Moon system. In addition, the amount of propellant necessary is very favourable compared to alternative orbits.

To cope with the unprecedented science data volume generated by Euclid in L2, K-band (25.5-27 GHz) communications will be used, which offer a transfer rate of 55 Mbit/s. As a consequence of the large variations in the Sun-spacecraft-Earth angle, a two-degrees-of-freedom mechanism for the antenna is needed to maintain the science telemetry link to Earth.

The selected orbit is eclipse-free. Station-keeping manoeuvres will be performed every 30 days throughout the operations phase of the mission.

Thales Alenia was selected in June 2013 to build the spacecraft. EADS Astrium was selected to provide the science module including the telescope. The propulsion system will be built by OHB Sweden.

In October 2017 NASA reported, that flaws with their infrared detectors will delay the mission, potentially by a year.

The launch has been contracted with Arianespace to take place in mid 2022 either on a Soyuz-ST-B Fregat-MT or an Ariane-62. The launch was delayed due to the COVID-19 pandemic to 2023.