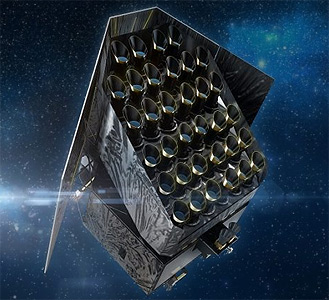 PLATO (Planetary Transits and Oscillations of stars) is the third medium-class mission in ESA's Cosmic Vision programme. Its objective is to find and study a large number of extrasolar planetary systems, with emphasis on the properties of terrestrial planets in the habitable zone around solar-like stars. PLATO has also been designed to investigate seismic activity in stars, enabling the precise characterization of the planet host star, including its age.

PLATO will observe a large sample of bright stars. In this way PLATO is able to completely characterize the discovered planets and their hosting stars. Specifically, the characterization includes the seismic analysis of the parent stars in order to precisely determine their mass, radius and age, i.e. those fundamental parameters that are required to precisely derive the same quantities for the hosted planets.

The key scientific goals are:

These goals will be achieved through:

The payload consists of a set of 32 normal cameras organized in four groups resulting in many wide-field co-aligned telescopes, each telescope with its own CCD-based focal plane array and an aspherical telescope with 6 lenses per telescope. Additionally there is a set of two fast cameras for bright stars, colour requirements, and fine guidance and navigation.

In February 2014, the SPC selected PLATO as the M3 mission of the Cosmic Vision 2015-2025 programme. OHB System was selected in June 2018 to build the spacecraft and the instruments.