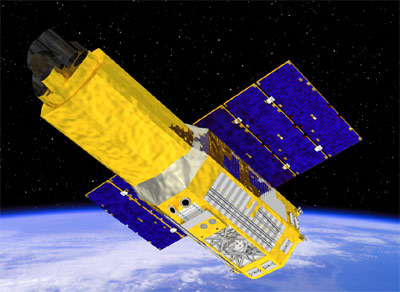 Astro E is a X-ray astronomy satellite bulit as a joint effort of NASA and the Japanese space agency ISAS. Observing the X-ray spectrum of the distant universe, Astro-E was to open a new window into the workings of black holes, neutron stars, active galaxies, and other very energetic objects.

Astro E was lost in a launch vehicle failure in February 2000, but a repeat Astro E2 (renamed Suzaku after successful launch) was built to conduct the mission. It was launched in July 2005 aboard a Japanese improved M-5 rocket.

Shortly after launch, Suzaku lost the liquid Helium for cooling the XRS-2 detector, severly impacting the resolution of the instrument. All other instruments are operable and provided valuable results. Suzaku operated well beyond the two years design life time until in June 2015, when the satellite's communication system intermittently cut off. In August 2015, the mission was declared a loss and the satellite was switched off on 2 September 2015.