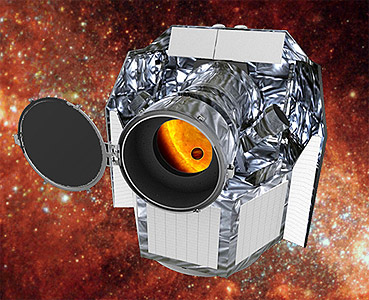 CHEOPS (Characterising Exoplanets Satellite) is a small satellite, which will target nearby, bright stars already known to have planets orbiting around them.

Through high-precision monitoring of the stars brightness, scientists will search for the telltale signs of a transit as a planet passes briefly across its face. In turn, this will allow an accurate measurement of the radius of the planet. For those planets with a known mass, the density will be revealed, providing an indication of the internal structure. These key parameters will help scientists to understand the formation of planets from a few times the mass of the Earth  super-Earths  up to Neptune-sized worlds. It will also identify planets with significant atmospheres and constrain the migration of planets during the formation and evolution of their parent systems.

The mission will also provide unique targets for more detailed studies of exoplanet atmospheres by the next generation of telescopes now being built, such as the ground-based European Extremely Large Telescope and the NASA/ESA/CSA James Webb Space Telescope.

CHEOPS will be implemented as a partnership between ESA and Switzerland, with a number of other ESA Member States delivering substantial contributions.

CHEOPS has one instrument  a photometer with a single CCD, operating mainly in the visible, that is at the focal plane of an on-axis Ritchey-Chrétien telescope of 32 cm diameter (clear aperture diameter of 30 cm). All platform requirements are aimed at supporting the functionality of the payload and its ultrahigh photometric precision. The main implications for the platform are related to pointing capabilities and the thermal environment for the payload.

CHEOPS will operate in a Sun-synchronous low-Earth orbit at an altitude of 800 km. It has a planned mission lifetime of 3.5 years and part of the observing time will be open to the wider scientific community.

Surrey Satellite Technology Ltd (SSTL) has been selected by the European Space Agency (ESA) for the competitive design phase of CHEOPS science satellite. The contractor selection for the implementation phase is planned by mid-2014 and the launch is scheduled fo 2018. The baseline scenario is a shared launch as auxiliary payload or co-passenger in Vega, or Soyuz or in another small launch vehicle.