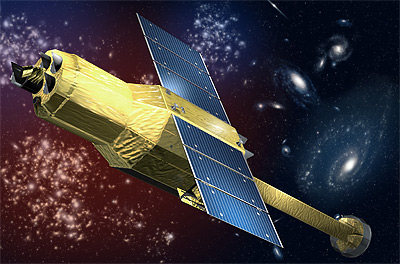 The Astro H or NeXT (New X-ray Telescope) satellite is a next-generation X-ray astronomy satellite by JAXA. In orbit, it was named Hitomi.

The NeXT mission opens a new observing window through the first imaging spectroscopy in the hard X-ray band above 10 keV. and also achieve unprecedented observing capability in the soft X-ray band below 10 keV.

NASA selected to participate on the NeXT mission as a Explorer Mission of opportunity. NASA provided the High-Resolution Soft X-Ray Spectrometer (SXS), which will probe matter in extreme environments; investigate the nature of dark matter on large scales in the universe; and explore how galaxies and clusters of galaxies form and evolve.

ASTRO H was launched together with three small payloads in February 2016 on an H-2A-202 rocket. In March, several pieces became detached from the satellite with the spacecraft not responding. In late April the mission was declared a loss. A chain of malfunctions led to the destruction: A erroneous reading from one of the vehicles body rate sensors showed a roll, which was not there effectively, which led the ACS to spin up the satellite, while sun and star sensors did not supply measurements. With the reaction wheels approaching maximum momentum levels, attitude thrusters were fired. But as the thruster settings were not updated after extensions of the mirror system, this led to even higher spin rates, which led to disintegration, likely of the optical bench and the outer solar arrays.

JAXA plans to launch a replacement XRISM (formerly called XARM) in 2020, which will only feature the SXS and SXI instruments and discard the HXT/HXI and its extentible optical bench and the SGD detectors. NASA is contributing a copy of the SXS instrument.