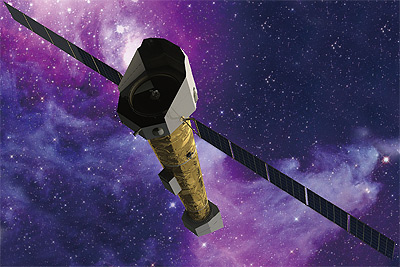 ATHENA (Advanced Telescope for High-Energy Astrophysics) will be an X-ray telescope designed to address the Cosmic Vision science theme 'The Hot and Energetic Universe'. The theme poses two key astrophysical questions: How does ordinary matter assemble into the large-scale structures we see today? and How do black holes grow and shape the Universe?

To address the first question, it will be necessary to map hot gas structures in the Universe  specifically the gas in clusters and groups of galaxies, and the intergalactic medium  determine their physical properties and track their evolution through cosmic time. To answer the second question, supermassive black holes (SMBH) must be revealed, even in obscured environments, out into the early Universe, and both the inflows and outflows of matter and energy as the black holes grow must be understood. Because most of the baryonic component of the Universe is locked up in hot gas at temperatures of millions of degrees, and because of the extreme energetics of the processes close to the event horizon of black holes, understanding the Hot and Energetic Universe requires space-based observations in the X-ray portion of the electromagnetic spectrum. By combining a large X-ray telescope with state-of-the-art scientific instruments, Athena will be able to make an important contribution to answering these questions.

On 27 June 2014, Athena was selected as the second L-class mission in ESA's Cosmic Vision 201525 plan, with a launch expected in 2028, later delayed to 2034. Athena will be launched by an Ariane-6 vehicle, with equivalent or larger lift capability and fairing size to that of the Ariane-5ECA. It will operate at the second Sun-Earth Lagrangian point (L2) in a large halo orbit, although the possibility of an L1 halo orbit is also being assessed.

The Athena scientific payload will have three key elements: