Comet Interceptor A, B1, B2 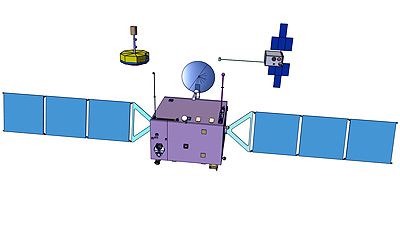 The Comet Interceptor mission was selected by ESA in June 2019 as ESA's new fast-class mission in its Cosmic Vision Programme. Comprising three spacecraft, it will be the first to visit a Long Period Comet (LPC) or even an interstellar object that is only just starting its journey into the inner Solar System.

The mission will travel to an as-yet undiscovered comet, making a flyby of the chosen target when it is on the approach to Earth's orbit. Its three spacecraft will perform simultaneous observations from multiple points around the comet, creating a 3D profile of a 'dynamically new' object that contains unprocessed material surviving from the dawn of the Solar System.

Comet Interceptor comprises three spacecraft. The composite spacecraft will wait at L2 for a suitable target, then travel together before the three modules separate a few weeks prior to intercepting the comet. Each module will be equipped with a complementary science payload, providing different perspectives of the comet's nucleus and its gas, dust, and plasma environment. Such 'multi-point' measurements will greatly improve the 3D information needed to understand the dynamic nature of a pristine comet while it is interacting with the constantly changing solar wind environment.

Previous comet missions, including ESA's pioneering spacecraft Giotto and Rosetta, encountered short-period comets. These are comets with orbital periods of less than 200 years that have approached the Sun many times along their orbits in relatively recent times and as a consequence have undergone significant changes: Rosetta's comet, 67P/Churyumov-Gerasimenko orbits the Sun once every 6.5 years while Comet 1P/Halley, visited by Giotto and other spacecraft in 1986, returns to our skies every 76 years.

Comet Interceptor is different because it will target a comet visiting the inner Solar System for the first time  perhaps from the vast Oort cloud that is thought to surround the outer reaches of the Sun's realm. As such, the comet will contain material that has not undergone much processing since the dawn of the Sun and planets. The mission will therefore offer a new insight into the evolution of comets as they migrate inwards from the periphery of the Solar System.