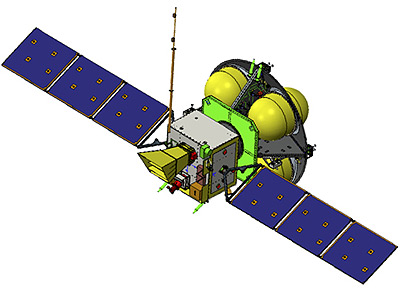 SMILE (Solar wind Magnetosphere Ionosphere Link Explorer) is a joint satellite mission of European Space Agency (ESA) and the Chinese Academy of Sciences (CAS), which will build a more complete understanding of the Sun-Earth connection by measuring the solar wind and its dynamic interaction with the magnetosphere.

SMILE will gather remote-sensing (X-ray) measurements of Earth's magnetospheric cusps, magnetopause, and bow shock, while also providing simultaneous auroral imaging (UV) of Earth, and coordinated in situ measurements (plasma and magnetic). These data will complement and build on the localised data provided by existing ground- and space-based observatories, including ESA's Cluster and Swarm missions, and NASA's Magnetospheric Multiscale Mission (MMS).

In launch configuration, the SMILE spacecraft consists of a 3.15-m-high stack of a platform plus a payload module whose dimensions are compatible with either a Soyuz, Ariane 6, or Vega-C launcher. At the top of the stack the payload module carries the four scientific instruments that will be used to study the interaction between the solar wind and the Earth's magnetic field.

The platform is 3 axis stabilised and provides the spacecraft resources as well as raises the orbit from the insertion orbit (SSO or LEO) to the science orbit. At the base of the stack, the propulsion subsystem of the platform has four 350-litre fuel tanks that feed an engine capable of delivering 490 newton of thrust. When the fuel tanks are full, the total weight of the stack will be around 2200 kg. The role of the propulsion subsystem is to push SMILE into a highly-elliptical, inclined orbit (HEO) after separation from the launcher. This orbit will take SMILE to a maximum height of 121 000 km above the Earth, far enough to allow the boundary of the Earth's magnetic field to be imaged.

The platform structure is made from an aluminium sandwich with carbon-fiber frames. It supports two deployable solar arrays with a combined area of 5.8 m² that supply a set of lithium-iron batteries with a total capacity of 60 Ah. Two star trackers and twelve 10-newton thrusters are used for attitude control and two antennas will transmit telecommands and spacecraft housekeeping data to the ground station. A single 20-mm-thick, 1m-by-1m aluminium honeycomb sandwich plate forms the top cover of the platform and the base plate of the payload module.

The payload module carries three instruments  two imagers operating in the ultraviolet (UVI) and X-ray (SXI) wavelengths, and one in situ instrument (MAG) for measuring the solar-wind magnetic field. The UVI and SXI are mounted on the main platform, while the MAG's two sensor heads will be positioned 80 cm apart along a deployable 3-m-long boom to reduce the influence of magnetic fields generated by the spacecraft. The fourth instrument will measure solar wind ions (LIA) and its sensors will be mounted on the platform.

SMILE will be three-axis stabilised, so that the SXI and UVI can continuously point towards their magnetospheric and auroral targets. However, since this requires pointing close to the direction of Earth, a baffle is required to shield the CCDs of the SXI from unwanted light pollution, bringing the total SXI height to 95 cm. The science data collected by the four instruments will be transmitted from the payload module using an X-band antenna.

SMILE's payload consists of two imaging instruments  the wide field of view soft X-ray imager (SXI) and an auroral ultraviolet imager (UVI)  and an in situ measurement package that will work in conjunction with the imagers to explore the properties of the solar wind. This package, built using knowledge and experience gleaned from past missions including ESA's Cluster and ESA-CNSA Double Star fleets, contains a light ion analyser (LIA) and a magnetometer (MAG).

The chosen orbit is highly elliptical and highly inclined (70 or 98 degrees depending on launcher), and takes SMILE a third of the way to the Moon at apogee (an altitude of 121 182 km, or 19 RE). This type of orbit enables SMILE to spend much of its time (about 80%, equivalent to nine months of the year) at high altitude, allowing the spacecraft to collect continuous observations for longer periods of time. This orbit also limits the time spent in the high-radiation Van Allen belts, and in the two toroidal belts. SMILE will be injected into a low Earth orbit by a Vega-C, an Ariane-62 or a Soyuz-ST-B Fregat-MT launcher from Kourou, and a propulsion module will bring the spacecraft to the nominal orbit with perigee altitude of around 5000 km and an apogee altitude of around 19 RE (121182 km).

Launch is planned for 20xx.