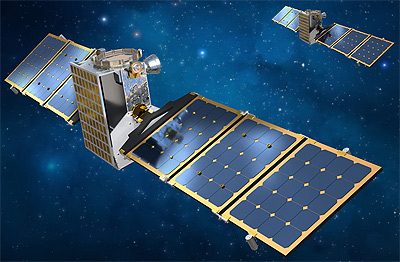 Janus by the University of Colorado, Boulder, is a mission consisting of two identical spacecrafts designed to fly by two binary asteroids to get images of the objects using both visible and infrared cameras. The mission is aimed at investigating how binary asteroids are formed and evaluating existing theories regarding how these systems evolve.

The Janus mission is led by the University of Colorado, Boulder. Lockheed Martin Space will design and build the spacecraft and provide mission operations after launch, with Malin Space Science Systems providing the instrument suite including visible and infrared cameras. The selected investigations will be managed by the Planetary Missions Program Office at NASA's Marshall Space Flight Center in Huntsville, Alabama.

The two spaceprobes will be launched in 2022 as secondary payloads on a Falcon-Heavy (Block 5)(px) together with the Psyche mission.

Due to delays of the Psyche mission, the Janus probes will not be able to explore the originally selected targets and will explore other asterois instead. In November 2022, they were removed from the Psyche launch to be manifested to fly with another mission.