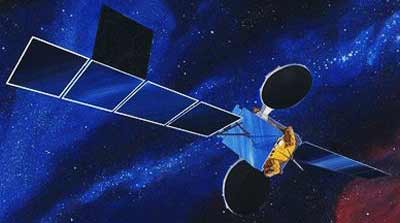 WorldStar was a series of telecommunications satellites for the WorldSpace Corporation, the US-based organisation providing direct satellite delivery of digital audio and multi-media communications services to emerging and underserved markets of the world, including Africa, the Middle East, Asia, Latin America and the Caribbean.

The operational system, which broadcasts audio, text and images to an audience of more than 4.6 billion people all over the world using a new generation of low-cost portable receivers, already comprises AfriStar, launched in 1998, and AsiaStar, launched in 2000. Construction of a third satellite - named CaribStar, later AmeriStar and eventually AfriStar 2 - has now been completed, but a launch is now unlikely. A fourth, WorldStar 4, was originally planned as back-up, and partially completed, but was later cancelled. Some of the parts built were reused (mainly the propulsion system) for other projects, other were disposed of.

Broadcasters have access to the satellite, via either a small individual station, or a central hub station. Leading edge techniques are used to transmit the digital and compressed programmes to the satellite. The satellite will send these programs directly to the public. Each satellite carries an innovative payload that implement baseband processing - appearing for the first time in a commercial programme - and a more conventional and "transparent" payload. The dual payload carried by WorIdSpace satellites has been designed by Alcatel Space at its Toulouse premises to supply the highest possible digital broadcasting performance and the highest level of reliability throughout the satellites lifetime. On board base-band processing Authorizes direct satellite access to a multitude of individual stations on one-third of the planet, without having to contribute to costly links towards an access “hub”. Thus, a small local station in Africa can broadcast throughout the continent. The conventional payload enables major radiobroadcasters to pool their resources and reduce operating costs. The high L-band power is achieved by a pair of 150 Watt traveling wave tube amplifiers (TWTA) operating in parallel. The ability to set frequencies, in both reception and transmission, makes the System very flexible. In orbit antenna reconfiguration allows antenna coverage optimization and enables one satellite to replace another whenever necessary.

The AfriStar satellite has developed a defect in its solar panels. As a result of this defect, the energy collected by those panels is less than intended. It was repurposed in 2010 for Samara's Yazmi online education company and then sold on in 2017 to CMMB/Hong Kong's Silkwave broadcasting operator as Spectrum 2, now part of CMMB Vision. AfriStar was retired in January 2018 an moved to a graveyard orbit.

AsiaStar was launched in March 2000. The satellite was acquired by in late 2014 by New York Broadband LLC for CMMB as Spectrum 1 as a placeholder and is being used to secure the orbital slot for Silkwave 1 (NYBBSat-1) to be launched in 2017.

Plans to launch a third satellite, AmeriStar (formerly CaribStar), to serve South America, Latin America, and the Caribbean from 95.0° west longitude were not carried out as the L-band frequencies used by Worldspace are commandeered by the United States Air Force. This satellite was reconfigured and is now known as AfriStar-2. AfriStar 2 was to be launched to 21.0° east longitude in August 2007. It has been completed, but was not launched due to financial problems of the company.