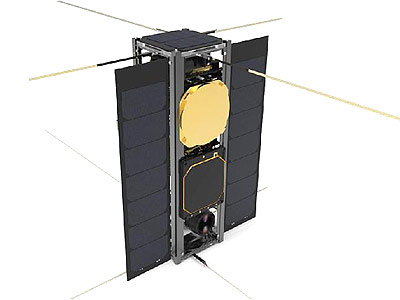 The satellite will serve as technology demonstrator for essential subsystems and form the basis on which an innovative Software Defined Radio (SDR) platform will be developed as primary payload.

The SDR is highly flexible to address a wide range of communication needs and will be a test bed to validate vessel detection. Additionally, the satellite will feature a medium resolution imager as secondary payload to demonstrate the feasibility of future remote sensing applications such as ocean colour monitoring and large fire tracking. This paper details the conceptual design and highlights the choices made around the proposed development.

The mission will further grow the core expertise of CPUT and its technology partners and validate the technology innovations that result from it. ZACube-2 will be a test bed for a shiptracking payload and will be used to validate the use case of employing nanosatellites in ocean vessel detection through the Automatic Identification System (AIS) protocol. Additionally, the satellite will carry medium resolution imagers as a secondary payload to demonstrate the feasibility of using a nanosatellite for imaging applications, such as ocean colour monitoring and fire tracking.

The launch was planned for 2018 on an Indian PSLV rocket but has been moved to a Falcon-9 v1.2 (Block 5). Then again it has been removed from the Falcon launch. Eventually it was launched in 2018 on a Russian Soyuz-2-1a Fregat rocket into a solar synchronous orbit.