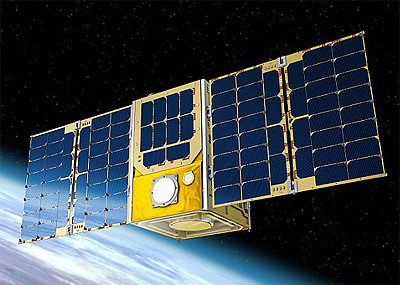 ANGELS (Argos Neo on a Generic Economical and Light Satellite) is the first nanosatellite designed and developed by French industry with support from CNES. It is set to carry Argos-Neo, an instrument 10 times smaller and consuming three times less power than the generation of Argos instruments currently in orbit.

Argos is the only global satellite-based system for location and data collection designed specifically to study and protect our planet's environment. Governed via an international collaboration between the major international space agencies, including NASA, NOAA, CNES, EUMETSAT and ISRO, the Argos constellation includes 6 operational satellites that cover the globe in near-real time, providing satellite telemetry services to over 22,000 active user platforms [PTTs (Platform Transmitter Terminals)] every month.

CNES and French firm NEXEYA are co-funding and developing ANGELS with a resolutely NewSpace approach to governance, design, development and testing, systematically employing miniaturized commercial-off-the-shelf (COTS) components. This approach comes with a certain degree of risk, but enables big reductions in costs and lead times.

The ANGELS project got underway in March 2017 and will culminate in the launch of the miniature satellite in the autumn of 2019 from the Guiana Space Centre (CSG). NEXEYA will then be ready to offer a whole range of nanosatellites in the 10-to-50-kg category for scientific and operational missions such as data collection and location from transmitters, maritime surveillance, radiofrequency spectrum surveillance and Earth observation. The ANGELS demonstrator nanosatellite will round out the fleet of Argos instruments already in orbit and will be operated by CNES. Data from the satellite will be processed by CNES subsidiary Collecte Localisation Satellites (CLS).