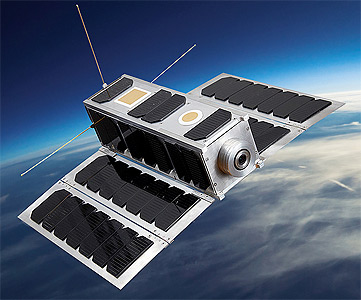 OPS-SAT is a 3U CubeSat for the European Space Agency (ESA) European Space Operations Center (ESOC) that will allow on-orbit testing and demonstration of experimental and innovative software that may be used in future ESA missions and programs.

The purpose of OPS-SAT is experimentation with on-board and ground software by offering a safe and reconfigurable environment for execution of software experiments relevant for ESAs future mission operation needs. The platform will allow ESOC experimenters to change every aspect of the on-board software in much the same way as one installs and changes operating systems and applications on a home PC. This means experiments that are not even imagined at launch can fly. The platform will allow normal terrestrial software (e.g. LINUX and Java) to be flown by using much more powerful processors than those presently flown.

To allow a fast and cost effective development cycle, OPS-SAT will be equipped primarily with commercial off-the-shelf components such as the 3 axis attitude control system, deployable fixed solar arrays, GPS receiver and UHF communication system. However it will also integrate state of the art components such as a fully CCSDS/PUS compliant S band chain with an uplink rate four times greater than any other ESA spacecraft and a miniaturised X-band providing up to 50 Mbps downlink. These rates are up to several hundreds times better than any other CubeSat flown before. GomSpace delivers the core nano-satellite platform for the program.