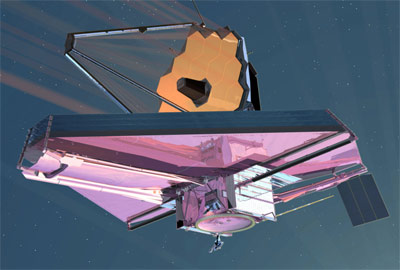 The JWST (James Webb Space Telescope), formerly named NGST (Next Generation Space Telescope), is conceived as a successor to the Hubble Space Telescope and is planned for launch no sooner than 2014. It should operate for at least five years and possibly even for as long as ten years.

Several innovative technologies have been developed for Webb. These include a folding, segmented primary mirror, adjusted to shape after launch; ultra-lightweight beryllium optics; detectors able to record extremely weak signals, microshutters that enable programmable object selection for the spectrograph; and a cryocooler for cooling the mid-IR detectors to 7 K. The long-lead items, such as the beryllium mirror segments and science instruments, are under construction. All mission enabling technologies were demonstrated by January 2007. In July 2008 NASA confirmed the Webb project to proceed into its implementation phase, and the project conducted a major mission review in March 2010.

Compared to currently existing or planned observatories, the JWST will have the unique advantage of combining superb image quality, a relatively large field of view and low background light with a highly stable operating environment. All of these are very important characteristics for the infrared observations the JWST will need to carry out to see the first stars and galaxies.

The Observatory is the space-based portion of the James Webb Space Telescope system and is comprised of three elements:

The Integrated Science Instrument Module, or ISIM, will house the four main instruments. Webb's instruments will be designed to work primarily in the infrared range of the electromagnetic spectrum, with some capability in the visible range. It will be sensitive to light from 0.6 to 27 micrometers in wavelength. JWST will feature following instruments:

The ISIM is divided in three "regions":

The Optical Telescope Element (OTE) consists of the primary mirror, the secondary mirror, the Fine Steering Mirror (FSM) and the structural pieces to hold everything together. The structural pieces include the secondary mirror support structure (SMSS) and the primary mirror backplane assembly. The OTE tertiary mirror and the fine steering mirror are both contained within an OTE subsystem known as the Aft Optics Subsystem. The backplane, in addition to holding the OTE together will be where the science instrument, in the Integrated Science Instrument Module (ISIM), is installed in the Observatory.

The primary mirror consists of 18 hexagonal elements and is foldable to fit into the launch vehicle. Deployed it has an diameter of 6.5 meters.

JWST will be launched on an Ariane-5ECA+, provided by ESA. The launch contract was signed in December 2015. The launch was planned for October 2018, later delayed to 2019. JWST will be placed in a Sun-earth L-2 halo orbit to protect it from the IR background of earth. In March 2018, another delay to May 2020 was announced, as more time for testing and evaluation was required. In June 2018, another delay to March 2021 was announced. Due to the COVID-19 pandemic and technical issues the launch was again postponed to late October 2021.