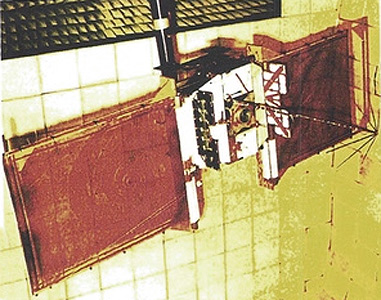 The Vampan satellite was part of a series of so called Program 11 or P-11 "Subsatellite Ferrets", low orbit ELINT/SIGINT satellites to pinpoint and characterize different Radar emitters in the Soviet Union and Warsaw pact states.

Vampan was a general search SIGINT payload in the 1001000 MHz range targeted at ABM radars. It was equipped with two pairs of planar spiral circularly polarized antennas called window shade antennas because they were rolled up during launch and would spread out once the satellite was spinning in orbit. One pair was for low-band (100 to 400 MHz) reception and the other pair for high-band (400 to 1000 MHz) reception. The spiral elements were formed using a gold deposition process on dacron mesh sheets and made to be as nearly omnidirectional as possible. One sheet with both the high-band and one of the low-band spirals was on a 1.2 by 2.4 meter dacron sheet and the other low-band spiral was on a separate 1.2 by 1.2 meter sheet.

This subsatellite was deployed from the propulsion rack of the Agena-D stage of KH-4A Corona reconnaissance satellites. It used two solid-fuel kick-motors to maneuver itself into its operational orbit after deployment.

A second satellite Vampan 2, was planned, but this mission was cancelled and the P-11 satellite bus was reasigned to the Savant 2 payload.