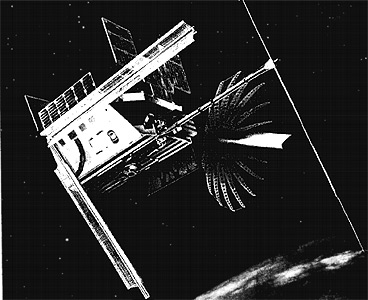 The Fanion Tripos satellites were part of a series of so called Program 11 or P-11 "Subsatellite Ferrets", low orbit ELINT/SIGINT satellites to pinpoint and characterize different Radar emitters in the Soviet Union and Warsaw pact states.

Fanion was a SIGINT mission targeted at EOB and Tripos was a general search SIGINT payload. Fanion derived a pencil beam from a Milss-Cross antenna pattern using two receivers and compared outputs. An accurate pointing angle measurements resulted when the satellite spun the crossing fan beams directly at the emitter. Tripos was the first pencil beam parabolic reflector antenna on the P-11 program.

These subsatellites were deployed from the propulsion rack of the Agena-D stage of KH-7 Gambit-1 reconnaissance satellites. They used two solid-fuel kick-motors to maneuver themselves into their operational orbits after deployment.