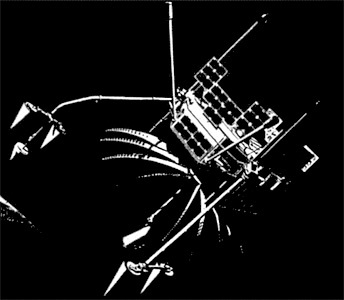 The Arroyo or Mission 7337 satellite was part of a series of so called Program 11 or P-11 "Subsatellite Ferrets", low orbit ELINT/SIGINT satellites to pinpoint and characterize different Radar emitters in the Soviet Union and Warsaw pact states.

Arroyo was a communications intelligence (COMINT) payload scanning the 12002250 MHz range. Although the payload was on orbit only one month, it collected a large quantity of information.

Mission 7337 was a reconnaissance receiver and data system that performed general search for microwave communications signals in the 1.200-2.200 GHz and 3.400-3.900 GHz frequency ranges. The system provided geopositioning data for the observed transmitting antennas within accuracy limits of 3 to 25 miles. In addition, the system could provide data to determine ground antenna pointing directions by postmission processing and analysis. The system received and screened RF signals, and for signals which meet programmed recognition criteria, measured and recorded target signal frequency, power levels for the sum and difference outputs of the dual-channel receiver, peak and average output power levels, phase difference between receiver channels and average channel frequency for PPM signals. No information content was obtained.

This subsatellite was deployed from the propulsion rack of an Agena-D stage of a KH-4B Corona satellite. It used two solid-fuel kick-motors to maneuver itself into its operational orbit after deployment.

This mission was the first vehicle with the electrical axis of its parabolic direction finding antenna parallel to the spin axis of the vehicle; it used a magnetic attitude control system to maintain the spacecraft axis within a few degrees of the orbit plane at 55° north latitude.

Arroyo was launched on 16 September 1971 and performed exceedingly well until mid-October 1971 at which time the spacecraft suffered a power failure, thus ending the mission.