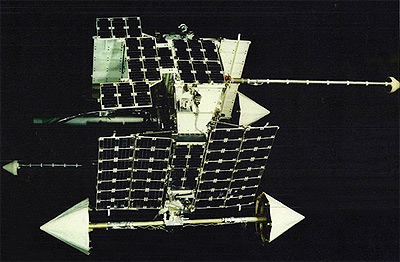 The Tophat (sometimes also refered to by Top Hat) satellites were part of a series of so called Program 11 or P-11 "Subsatellite Ferrets", low orbit ELINT/SIGINT satellites to pinpoint and characterize different Radar emitters in the Soviet Union and Warsaw pact states.

The Tophat communications intelligence (COMINT) payloads were used to intercept troposcatter communications signals in the 4501000 MHz range, analyze the transmitted signal characteristics, and sample the signal information content. Tophat was equipped with four identical antennas in two arraystwo pointing up and two pointing down. It was equipped with three tape recorders, one serving as backup. It was not capable of operating in transpond mode, meaning that data had to be recorded and dumped. The satellite could provide geopositioning data to an accuracy of approximately 18 to 46 km.

These subsatellites were deployed from the propulsion rack of the Agena-D stage of a KH-4B Corona or directly from a KH-9 Hexagon reconnaissance satellites. They used two solid-fuel kick-motors to maneuver themselves into their operational orbits after deployment.