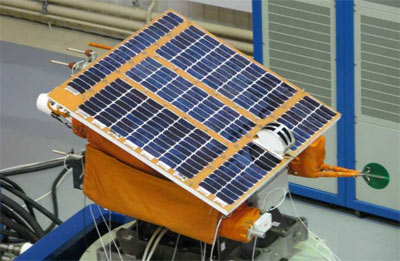 The Universitetsky 2 (Tatyana 2) was a small technological satellite developed by the Moscow State University (MGU) and built by NPP VNIIEM.

The overall objective was the measurement of TLEs (Transient Luminous Events) in Earth's atmosphere. The goal was to observe simultaneously TLE and NUV (Near-Ultraviolet) emission profiles in high temporal resolution (ms) in a wide spectrum of 8 bands.

Universitetsky 2 was built for a 1 year lifetime. It carried following instruments:

Launched as a piggy-back-payload on a Soyuz-2-1b Fregat rocket, it reached successfully orbit on 17. September 2009.

The Universitetsky 2 spacecraft ended its operations on 16 January 2010 due to an attitude failure of the spacecraft. It has measured more than 1000 flashes during three months of its operation.