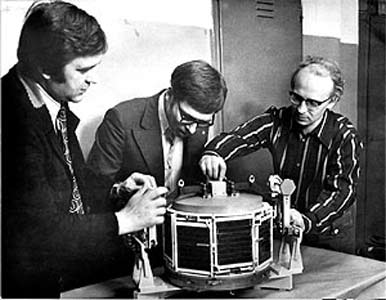 MEI's Radio Sputnik 1 was developed in parallel with MAI's Radio Sputnik 2, with both satellites slated for a joint launch. Both satellites had a weight of 40 kg each. RS-1 and RS-2 both contained sensitive Mode A (145 MHz uplink and 29 MHz downlink) linear transponders telemetry beacon and Codestore unit similar to AMSAT-OSCAR 6.

These first Russian amateur radio satellites were launched on 26 October 1978 together with the dummy payload Kosmos 1045 on the fifth development flight of the Tsiklon-3 launch vehicle. Transponders aboard RS-1 and RS-2 could be kept operating for only a few months before battery problems disabled both spacecraft.