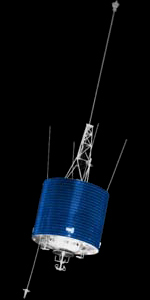 Tsikada (11F643) was a Soviet civilian satellite navigation system used by the Soviet Merchant Marine and Academy of Sciences, but also by the military. It was an equivalent to the purely military Parus system.

The Tsikada satellites were very similar to the Parus satellites and also used a NPO PM built pressurized cylindrical bus with gravity-gradient stabilization. The satellites transmitted Doppler-shifted VHF transmissions at around 150 MHz and 400 MHz of their position and orbital characteristics. They operated from a 1000 km orbit with 82.9° inclination. Satellites were placed in planes spaced 45° apart.

The development of Tsikada began in 1974 and the first satellite was launched in 1976. The system entered the operational phase in 1978.

21 satellites were launched with one failure to reach orbit, all on Kosmos-3M boosters. All except one received Kosmos designations. A single modified satellite was launched as the last of the series to test the Kurs marine traffic location and control system.

Two satellites in this series carried additionally to the navigation payload each two amateur radio payloads: Kosmos 1861 (Tsikada #16) featured the RS 10 and RS 11payloads and Kosmos 2123 (Tsikada #17) crried the RS 12 and RS 13 payloads.

Also operated in the Tsikada system were the Nadezhda and Nadezhda-M satellites, which featured an additional search and rescue system for locating vessels and aircraft in distress.

Beginning in the 1990ies, the Tsikada system was gradually superseded by the Uragan (GLONASS) system.