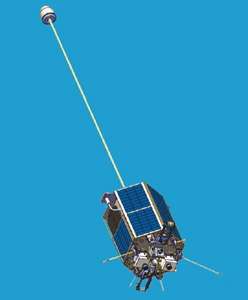 Yubileyniy, also referred to as RS-30 (Radio Sputnik-30) by the amateur community, is a small satellite named to honour the 50th anniversary of the first satellite in 1957. It was built by by ISS Reshetnev together with the Siberian State Aerospace University (SibSAU) of Krasnoyarsk. The Federal Space Agency, the Space Forces of Russia and the Central Council ROSTO are the backing entitys.

The satellite is based on ISS Reshetnev's Yubileyniy platform, which features an hexagonal prism structure, body mounted solar cells and a gravity gradient boom. The payload was partially developed and built by students of SibSAU.